Storyline -Willy Wonka, the greatest candy maker in the world, has a problem: it's time for him to retire, but who can replace him? Who will make new candy dreams come true?
Willy Wonka gathers all the Oompa-Loompas to announce his retirement and the search for the perfect "bright spark" of a child to replace him ("Golden Age of Chocolate").
Meanwhile, Charlie Bucket lives in a tiny shack with his family. They are very, very poor. Charlie's dad reads in the newspaper that Mr. Willy Wonka is having a contest! Golden Tickets have been hidden in five bars of chocolate; the lucky people who find Golden Tickets will win a tour of the factory and a lifetime supply of chocolate.
The local candy man arrives with his cart of Wonka treats and gives Charlie a sample "on the house" ("The Candy Man"). While enjoying his candy, Charlie learns that the enormous eater, Augustus Gloop, has found the first Golden Ticket in Munich, Germany. The reporter, Phineous Trout, announces that Veruca Salt has found the second Golden Ticket in São Paulo, Brazil. Veruca's father assisted her search by having factory workers shell chocolate wrappers.
Charlie makes his way home to a "Surprise!" It's Charlie's birthday! Charlie receives a Wonka bar as his present, but no Golden Ticket is found. The family tunes in the radio, only to learn Violet Beauregarde, of Snellville, Georgia, has found the third Golden Ticket. Violet is a gum chewer who switched to chocolate in order to win the contest, but is now back to constantly chewing gum. Phineous Trout interrupts to announce that Mike Teavee, in Television City, California, has found the fourth Golden Ticket. Mike and his mother explain that the only thing they need is TV, the Internet and computer games.
The city is blanketed in a deep snow and, Charlie encounters the Candy Man on the way to school. Charlie finds a coin buried in the snow and asks the Candy Man if it belongs to him. The Candy Man rewards Charlie with a Wonka bar for being "such a good kid." The starving boy wolfs it down and then immediately purchases another... finding the final Golden Ticket ("I've Got a Golden Ticket")! He runs home to tell his family the news, and they decide Grandpa Joe should accompany Charlie on the tour of Wonka's factory ("At the Gates – Pure Imagination").
Wonka greets the five winners and their parents at the gates, and they begin their tour of the magical factory ("Factory Reveal Sequence"). They arrive at the Chocolate Smelling Room, where Wonka chills chocolate to the perfect temperature for dipping strawberries. Augustus cannot resist tasting the chocolate and falls into a vat of it, which hardens instantly like Magic Shell, trapping him. The Oompa-Loompas remove Augustus and his mother and reveal the moral of easting too much ("Oompa-Loompa 1"). They arrive at the Inventing Room, where Violet is tempted by the Everlasting Gourmet Gobstopper. She snatches one, chews it and swells like a giant blueberry. The Oompa-Loompas remove her and her mother and explain the hazards of children who chew gum too much ("Oompa-Loompa 2").
Charlie and Grandpa Joe are separated from the group and discover the Fizzy Lifting Drink. They taste a bit of the drink and fly towards the sky. Right before they are sucked into a large fan, they discover that, by burping, they float safely back to the ground ("Burping Song"). They rejoin the group in the Nut Room, where Veruca demands a squirrel, a pink candy boat and an Oompa-Loompa ("I Want it Now!"). Veruca and her father disappear down a trash chute that may or may not lead to the incinerator, and the Oompa-Loompas discuss the moral of spoiled brats ("Oompa-Loompa 3").
With just Charlie, Grandpa Joe, Mike and Mrs. Teavee left, the tour reaches the Choco-vision Room, whre Mike meets his temptation and is shrunk to barely six inches tall. The Oompa-Loompas discuss the moral of too much TV and technology ("Oompa-Loompa 4").
At the conclusion of the tour, Charlie does something remarkable: he thanks Wonka for the tour and admits to breaking the rules by tasting the Fizzy Lifting Drink. Wonka reveals the truth: that the tour was a test of character, and only Charlie has succeeded! Wonka proclaims Charlie as his successor as Charlie's family joins them at Wonka's factory ("Finale"). 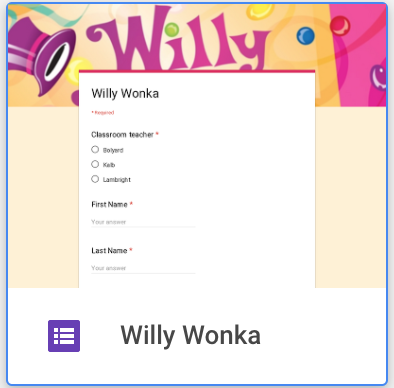