Storyline -
The show opens with the First Mate calling everyone “on deck.” The stage fills with pirates, who address the audience in song (“Pirates Putting On A Play”), giving the usual admonitions about cell phones and photographs, then introducing Jack and Annie and relating the story of their discovery of the Magic Tree House. At the end of the song, Jack and Annie are left alone in the tree house to discover that the mysterious “M Person” from their previous adventures has left a book with a picture of a beautiful tropical island. Thinking “M” might be offering them a vacation, they make a wish to travel to the scene in the book, and the tree house whisks them away (“Spinning To An Island”).
The stage fills with Pelicans, Crabs, Starfish, and other Island Creatures enjoying a beautiful sunny day. Teeki the seagull leads the group in song, celebrating their happy, carefree life (“The Tropical Island Song”). Jack and Annie arrive on the beach and the creatures scatter. Just as Jack and Annie begin to enjoy the sunshine and water, Jack spots a ship with a skull and crossbones flag and realizes that they have accidentally come to a Caribbean island in the 18th Century – the time of pirates! And that a group of Pirates is rowing from the ship to the island! (“Row, Dogs, Row”) Jack and Annie try to run and hide, but they are captured by the dastardly Captain Bones, who proudly introduces himself as the “rottenest rat on the sea” (“How Do You Do, I’m Captain Bones Part 1 and Part 2”). Bones orders his crew to search the tree house for gold and is very disappointed to learn that it contains books – until a crew member discovers the “M Person’s” gold medallion. Bones believes Jack and Annie must have discovered the legendary Captain Kidd’s buried treasure on the island and demands they lead him to the rest of it. Jack and Annie protest that there’s no more treasure, but Bones produces a treasure map that shows the island as the location of Kidd’s gold and jewels. Jack reads a riddle written on the map, but he and Annie are unable to solve it – so Bones orders them into the rowboats and back to the ship.
In Captain Bones’s absence, the pirate crew on the ship is having a party (“Bones, Bones, Bones”) until Bones shows up and engages them in an “Aarrgh Off” that he easily wins. Bones orders his cabin boy Jonah to take Jack and Annie to the hold until they decide to tell him where the treasure is hidden, then storms off to his cabin. Jack and Annie wonder why Bones is so mean, and the crew reveals that he has been especially irritable since his beloved parrot left him, noting that (“Every Pirate Needs A Parrot”).
Jonah takes Jack and Annie down to the hold and they become friends. They tell him they have read the riddle on Bones’s map and Jonah is amazed that two young kids can read. Claiming that reading is actually easy (and wonderful!) Jack and Annie offer to teach Jonah (“Reading A Book”). Jonah is thrilled and helps them solve the riddle; they realize that the treasure is buried under a large rock back on the island. Planning to escape to the tree house while Bones and his crew are busy digging under the rock, Jack and Annie call for Bones to take them back to the island for the treasure. Bones orders his entire crew into rowboats and they set off, singing about pirates’ legendary love affair with gold (“Gold Part 1”).
Once on shore, the pirates begin to dig, despite the fact that a gale seems to be blowing in (“Gold Part 2”). Just as their shovels strike the top of a treasure chest, Polly the parrot swoops down to warn them to quit digging and go back to the ship before the storm hits (“Go Back, Go Back!”). Bones angrily protests, but, knowing that a pirate should never ignore a warning from a parrot, the crew runs for the rowboats, allowing Jack and Annie to escape to the tree house. Annie makes the wish to go home and the tree house spins them back to the Frog Creek woods (“Spinning Home”). They are surprised to find that Polly has traveled in the tree house with them, and even more surprised when Polly transforms into Morgan Le Fay, revealing herself to be the mysterious “M Person.” Assuming that Morgan was hoping they would return with gold and jewels from Captain Kidd’s treasure chest, Jack and Annie apologize for not accomplishing their mission. But Morgan assures them that real treasure has nothing to do with gold, and can be found in the simple pleasures of everyday life. The entire cast joins in to celebrate this idea with the audience (“Treasure”), and the play closes with the pirates calling for the audience to show their appreciation for the players (“Pirates Putting On A Play Reprise”). The company bows and sends the audience home with a reprise of the joyful song and dance from the tropical island (“Bows”).

Character Breakdown -
​Jack
Jack is a young boy. He is bookish, careful and thoughtful, but he is NOT a nerd! Jack has tremendous curiosity about the world around him and loves to take notes about his observations. Jack tends to be very cautious in new situations, and his adventures in the tree house help him develop his confidence. He has a good (and protective) relationship with his younger sister, Annie, though her more impetuous nature often gets on his nerves. This is a big role and requires a strong singer and actor.

Annie
Jack’s younger sister and, in many ways, his opposite in terms of personality. She is a risk-taker who often follows her heart instead of her head. She sometimes teases Jack about his careful attitude toward life and encourages him to be more adventurous. She loves animals of any kind and has a very loving heart. Like Jack, this role requires strong singing and acting. When auditioning, you might mix and match your Jack and Annie hopefuls to see which ones have the best brother-sister chemistry.

Morgan/Polly
Morgan is an ageless librarian enchantress. By the end of the play, Jack  and Annie learn that the Magic Tree House belongs to Morgan. Morgan magically turns herself into Polly so that she can try to help the kids on this adventure, so for most of the show, Morgan will be costumed as a parrot. Look for an actor who can move easily in a more elaborate costume for most of the show. Although she doesn’t speak or sing until the end, this large and important part requires one of your most mature female performers with both strong singing and acting skills.

First Mate
The First Mate enjoys being in charge of his  crew and must jumpstart the play with a commanding first line. He has solo singing lines and also helps to narrate the story, so cast an actor with a strong speaking and singing voice. This character can be played by a male or female actor.

Captain Bones
Captain Bones is the epitome of a fearsome, odious pirate. He enjoys being vile and mean. Look for an actor who isn’t afraid to really  put himself out there – one who has both a physical and vocal swagger. Consider casting your strongest comic performer for this role – the absurd comedic tone of the play is highly dependent on Bones. If possible, it would be fun to cast an actor who is smaller in stature than his minions to highlight the comedy of his bullish ways. Although Bones does sing  a solo part on “How Do You Do, I’m Captain Bones (Part 2),” those lines can be spoken, so if you have a kid who is a talented actor but a less-experienced singer, this role would be good for him. Captain Bones can be played by either a girl or a boy as long as the actor has a commanding stage presence and great comedic timing.

Pinky, Stinky, Blinky and Slinky
Pinky, Stinky, Blinky and Slinky are henchmen for Captain Bones. Though these pirates are devoted to Bones, they are not nearly as clever or mean. These large speaking roles all require good comedic timing. These roles are good for kids who will relish being able to dress and talk like a pirate in front of their peers. Look for strong actors who can carry a tune, are good at focusing and taking direction and who are capable of working together as a team. Cast males, females or both.

Jonah
Jonah is a cabin boy who wants to help  Jack and Annie escape from Bones. In stark contrast to the Pirates, he is kind, soft-spoken and tender-hearted. While being held captive, Jack and Annie teach Jonah how to read. Jonah’s solo parts in “Reading A Book” require a strong singer, and the role requires an actor capable of quiet subtlety, so if possible, cast one of your strong performers in this role. If you are short on boys, cast a girl to play a boy.

Billy, Molly, Nathaniel, Wilhelmina, Peter, Pirates
Billy, Molly, Nathaniel, Wilhelmina, Peter and additional Pirates are the often funny and spirited Pirates under the command of Captain Bones. The named Pirates should be the strongest actors and singers of this group. If you don’t have enough boys to play Billy and Nathaniel, cast girls who would have fun playing a boy. Casting extra Pirates is a good way to round out the chorus and to utilize performers who are less experienced.

Teeki the Seagull
Teeki the Seagull is a jubilant bird with  a need to express her joy for life. She is the matriarch of the Island Creatures on this particular Caribbean island. Cast an actor  who enjoys the spotlight and who is physically uninhibited – someone who has good vocal and movement skills and isn’t afraid to “get into the groove” of the “Tropical Island Song.”

Pedro the Pelican
Pedro the Pelican is a prim and proper pelican. Although not a large role,  Pedro has a few solo lines. It might be comedic to watch this rather rigid, self-conscious bird get lured into the groove of “The Tropical Island Song” until he or she is the most enthusiastic dancer of them all. Cast an actor who can play shy but who isn’t afraid to dance and let loose on stage.

Island Creatures
The Island Creatures including Pelican  #1, Pelican #2, Pelican #3, Lizard #1, Lizard #2, Lizard #3, Corey the Crab, Starfish Partner, Additional Crabs, Lobsters, Starfish and Jellyfish sing “The Tropical Island Song” and “Treasure.” Cast as many performers as your stage and program will allow. As long as you have a few strong performers representing each group of creatures, casting extra creatures is a great way to give additional children experience without the pressure of a large role. Feel  free to assign character names to match the number of performers you cast. If needed, you can double-cast your more experienced Island Creatures as Pirates as well. 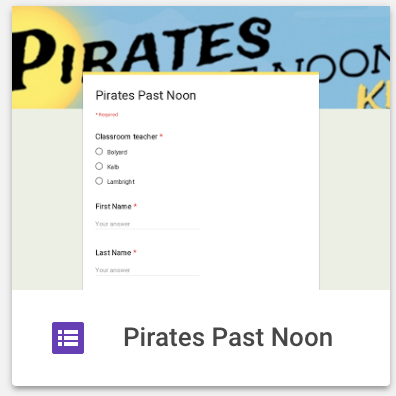