This video is the 1 hour version - we would be doing a 30 min. version!

Storyline -
Professor Harold Hill, a fast-talking traveling salesman with a shady reputation ("Rock Island"), arrives in River City, Iowa, on the morning of July 4, 1912. Hill moves from town to town, selling musical instruments, uniforms and the promise of forming a boy's band. Hill is a crafty character whose standard procedure is to leave town with the money he collects before anyone is able to discover he cannot read music. The townspeople greet each other and sing with pride about their inflexible nature ("Iowa Stubborn"). As they disperse, Hill enters the scene and begins to focus attention on the need for a boy's band and the trouble that has entered River City in the shape of a pool table ("Ya Got Trouble").
An old friend has warned Harold about Marian, the willful town librarian and music teacher. After her first encounter with Harold, Marian speaks about his unwanted advances to her mother, Mrs. Paroo. Mrs. Paroo scolds Marian for not speaking to the man and criticizes Marian's high expectations ("Piano Lesson"). Marian reflects on her plight while listening to her young piano student, Amaryllis, practicing a piano lesson ("Goodnight, My Someone"). Later at the Fourth of July celebration, Harold steals the crowd's attention to move in and sell his band idea ("Seventy-Six Trombones"). Mayor Shinn pushes for proper credentials from Harold.
Harold follows Marian to the library, where she warns him that she will check his credentials. The ladies in town gossip about the charming newcomer ("Pick-a-Little, Take-a-Little").
Marian appears with the reference book, but before she can hand it to the mayor, Gracie excitedly announces the arrival of the Wells Fargo Wagon with the new band instruments ("The Wells Fargo Wagon"). With the exception of the Mayor, the town is now under Harold's spell. Marian's research pays off, but she withholds the evidence when she discovers Harold is helping her brother, Winthrop, to cure his speech impediment. Marcellus, Harold's old friend and former partner, leads the crowd in a new dance ("Shipoopi"). Winthrop returns home from fishing and sings for his mother and sister the song that Harold has just taught him ("Gary, Indiana").
Future band members have been busily working on Harold's "Think System" of musicianship while Harold meets Marian at the footbridge. She confesses that she has known he was a fake since the third day he was in town. Now it's Harold who is off-balance. The uniforms arrive, but so does Charlie Cowell, Harold's arch enemy. Marian tries to prevent Charlie from getting to the Mayor, but is unsuccessful. She wants to warn Harold, but Charlie reaches him first. He still has time to run, but he can't – he's hooked on Marian.
The angry town gathers, hearing that Harold is a fake. Marian speaks out in his defense while the band arrives in uniforms. Harold is handed a baton. "Think, men, think," is his command. At the drop of his arm comes the Minuet in G as it has never been "played" before. But each struggling note is music to the parents' ears. Harold has his band at last, and a truly loving librarian by his side. 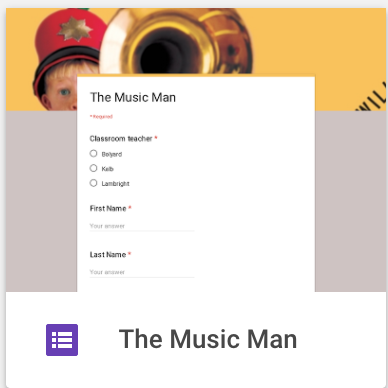