VILLAGERS enter ("One by One") to share their favorite story. RAFIKIS, the narrators, gather ANIMALS from across the Pridelands to welcome the newborn cub of King MUFASA and Queen SARABI ("Circle of Life"). Mufasa's jealous brother, SCAR, refuses to attend the ceremony, which angers the king. As time passes, SIMBA grows into a curious young lion. Mufasa explains the circle of life to his son and how one day he will become king of the Pridelands. Out for revenge, Scar encourages his nephew to visit the forbidden Elephant Graveyard. Simba takes his best friend, NALA, there after ditching ZAZU, Mufasa's loyal advisor ("I Just Can't Wait to Be King"). At the graveyard, three hungry hyenas – SHENZI, BANZAI and ED – corner the cubs, but Mufasa arrives and takes them home. Scar emerges to recruit the HYENAS to join his murderous plan to become king himself ("Be Prepared").
Back in the safety of the Pridelands, Mufasa reprimands Simba, then tells him to look up at the stars – the great kings of the past will always be there to guide him. The next day, Simba gets trapped in a wildebeest stampede started by Scar. Mufasa rescues Simba, but is pushed by Scar into the stampede, where he is trampled to death. Scar blames Simba and tells him to run away and never return. Scar then assumes the throne, uniting lions and hyenas under his dark reign. Lost in the desert, Simba meets TIMON and PUMBAA, who take him to their "worry-free" home in the jungle ("Hakuna Matata").
Under Scar's rule, the Pridelands are nearly destroyed. Nala, now grown, leaves to get help and finds Simba alive in the jungle ("Can You Feel the Love Tonight"). She urges him to come back home to take his rightful place as king but, still ashamed, Simba refuses. Rafki appears and helps him remember his father ("He Lives in You"). With newfound courage, Simba returns to the Pridelands. Timon and Pumbaa distract the hyenas ("Luau Hawaiian Treat") while Nala rallies the lionesses. Simba confronts his uncle, the truth of Mufasa's murder is revealed and Scar runs away, pursued by angry hyenas. With peace restored in the Pridelands, Simba takes his place as king and the circle of life continues ("Finale").

Character Breakdown
Villagers
Your entire cast will portray villagers, with central characters emerging from this essential group. Whether an actor transforms into a lioness, Simba, or Mufasa, this can be done by donning a costume piece, prop, or mask to transistion from villager to character. Some villagers will play many roles in the story, from animals of the Pridelands (such as giraffes, elephants, lionesses, etc.) to hyenas to wildebeest (should you choose to stage the stampede with actors). Whenever not speaking as their assigned characters, cast members will return to their villager characters, sitting and watching the action unfold on the perimeter of the stage. Use this concept to suit the needs of your ensemble; multiple actors can play the same role throughout the show simply by passing on a key costume or prop piece.
Rafikis
A wise madrill who acts as healer of the Pridelands and guides Simba on his journey home. The Rafiki narrators - five aspects of one character - are the five leading villagers who become the story's narrators. They are key to the storytelling, and should be played by confident performers who are able to enunciate and project, so look for strong singers, as together they sing sections of "He Lives in You" and "Cricle of Life with Nants' Ingonyama." There is an air of mystery to Rafiki, who seemingly knows all, so be sure to cast actors who can command the stage as a cohesive unit. Though written to feature five narrators, the script can be adapted to incorporate more students (or fewer) depending upon your cast size.
Gender: both
Mufasa
The strong, honorable, and wise lion who leads the Pridelands. Mufasa should command respect onstage and also show tenderness with his son, Simba. Cast a mature actor who can convincingly portray the king.
Gender: male
Sarabi
A featured lioness, Mufasa's mate, and Simba's mother. She has a few speaking lines and provides an opportunity for an actor who can be maternal to Simba and leader of the lionesses.
Gender: female
Zazu
The anxious yet loyal assistant to Mufasa who is always busy trying to do his duty. Zazu's lyrics are spoken rather than sung, and the role can be played by a boy or girl.
Gender: both
Scar
The antagonist of the show, overcome with jealousy of his brother, Mufasa, and nephew, Simba. Coldhearted and wickedly intelligent, he will stop at nothing to become king of the Pridelands. Cast a mature performer who can bring out this villain's dark side while handling Scar's sarcastic sense of humor. As his solos can be spoken, opt for an actor over a singer.
Young Simba
The protagonist of the story, is an adventurous and endearing cub who can't wait to be king of the Pridelands. Simba is playful, energetic, and naive, but after his father Mufasa's death, Simba struggles with shame and his destiny. Cast a strong singer and dynamic performer in this role.
Gender: male
Simba
Grows from a cub to lion in "Hakuna Matata." Older Simba has more complex moments as he reunites with Nala, mourns his father, and returns to confront Scar, so cast a more mature actor. Be sure that the change in actors is clear: Try having Young Simba hand-off a costume piece, such as a medallion, to older Simba. Also be sure that Simba and Young Simba share a movement vocabulary.
Gender: male
Young Nala
A courageous lion and Young Simba's best friend. She is not afraid to speak her mind. While Young Nala does sing a little, look for a strong female performer who can portray this confident cub.
Gender: female
Nala
Grows from a cub to a lioness before she confronts Scar, so cast a more mature actress. As with Young Simba and older Simba, ensure that this switch in actors performing a single role is clear. Direct the actors to share a mask or costume piece that distinctly represents Nala.
Gender: female
Banzai
A slick yet childish hyena who works for Scar. He would be the leader of the group if hyenas weren't so lazy. Look for an outgoing and confident actor who can portray nastiness and gruffness. As banzai is always featured with Shenzi and Ed, consider auditioning the hyenas in trios.
Gender: male
Shenzi
One of Scar's hyenas who plot to take over the Pridelands. She is the sassy one of the trio and is always looking out for herself. With Banzai and Ed, she should be able to laugh loudly and long, as well as be menacing to Young Simba and Young Nala.
Gender: female
Ed
The third member of Scar's trio of lackeys. He has a loud, cackling laugh that is his only form of communication. Ed should be played by an actor who can laugh unabashedly and communicate through physicality and facial expressions rather than words. This role can be played by a boy or girl.
Gender: both
Hyenas
Scar's army, helping carry out his evil plot to take over the Pridelands. Hyenas are mangy, mindless creatures who sing in "Be Prepared." Cast actors who are able to sing the background parts of that song while playing the loud and raucous characters. Your hyenas can double as animals of the Pridelands or lionesses.
Gender: both
Timon
An outcast meerkat who lives in the jungle with Pumbaa. He is afraid of his own shadow, but pretends to be the confident, relaxed leader of the duo. Timon is one of the funniest characters in the show and should be played by a charismatic actor who understands comic timing. This part can be played by a boy or a girl.
Gender: both
Pumbaa
A kindhearted, sensitive warthog who enjoys his simple life of grubs and relaxation. Cast a boy or girl who can portray this loveable and loyal friend to Timon and Simba with deadpan humor.
Gender: both 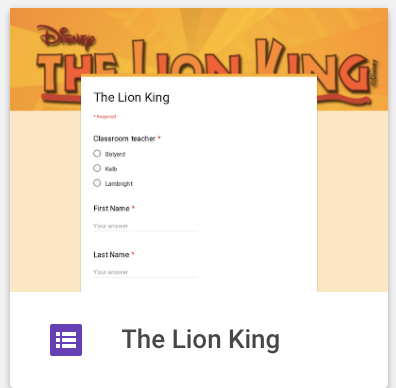