Princess Jasmine must choose a husband by tomorrow night or be forced to marry the Royal Vizier, Jafar. Jafar hatches a plan with his parrot, Iago, to use the lamp from the Cave of Wonders to steal the throne from the Sultan. As the Tiger God pronounces that only the "diamond in the rough" can take the lamp, Jafar sees a vision of Aladdin stealing a load of bread. While escaping from the angry mob of Vendors, Aladdin runs into Princess Jasmine in disguise ("One Jump Ahead"). Finally caught by the Palace Guards, Jasmine reveals her identity, trying in vain to save her new friend, Aladdin ("One Jump Ahead – Reprise"). Jafar releases Aladdin from jail on the condition that he retrieve the lamp. In the Cave of Wonders, the very hungry Aladdin takes a banana, which causes the cave to trap him inside. Aladdin rubs the lamp for some light, which releases the Genie, who offers him three wishes ("Friend Like Me"). Aladdin first wishes to escape and, second, to become a prince. The flying carpet, Avis, arrives and takes Aladdin and Genie back to Agrabah.
Jasmine argues with Jafar and the Sultan about Aladdin when a new suitor arrives ("Prince Ali"). Although she is initially put-off by Prince Ali, Jasmine soon warms to him, and he takes her on a magical carpet ride ("A Whole New World"). Back at the palace, Jafar has taken the lamp and become the Genie's new master. Prince Ali challenges Jafar, who has used one of his wishes to turn himself into a powerful sorcerer. Jafar accepts Prince Ali's challenge, but reveals that he is really Aladdin ("Prince Ali – Reprise"). Aladdin tricks Jafar into using his final wish to turn himself into a powerful genie. Bound by the laws of the lamp, Jafar is imprisoned. Aladdin then uses his final wish to set the Genie free. Inspired by Aladdin's selflessness, the Sultan changes the law, allowing the princess to marry whomever she would like. Jasmine chooses... Aladdin ("Finale").

Character Breakdown -
Lamp Salesman
The Lamp Salesman is a likeable fast-talking vendor who serves as the principal storyteller in our show. The student playing this role should be comfortable onstage and have a clear speaking voice. Since this is not a major singing role, it is ideal for a strong actor still developing his or her singing skills.
Gender: both
Aladdin
Aladdin is a juggler who becomes the good-hearted, diamond-in-the-rough street rat. Aladdin carries most of the show, so look for your best singer and most sympathetic actor to fill this role. The audience should enjoy Aladdin's adventures and root for him to save the day.
Gender: male
Jasmine
Jasmine is a street performer who dons a tiara to play the feisty and rebellious Princess. Jasmine embodies the characteristics of a great leader. Cast a young lady with a strong singing voice and solid acting skills, who can show strength in her beliefs and overcome the spoiled brat stereotype of a princess.
Gender: female
Jafar
Jafar is a shady fakir who becomes the the sinister vizier to the Sultan. The villain of the story, Jafar is ruthless in his pursuit of power. Cast a performer who is able to find variety of ways to portray evil (subtle, menacing, over-the-top, etc.). Although Jafar sings at the end of the show, the song can be easily spoken in rhythm, so cast the role based on your student's ability to take command of the stage.
Gender: male
Sultan
The Sultan is the aloof Toy Vendor who transforms into the doddering ruler of Agrabah. The Sultan remains blissfully unaware of Jafar's nefarious ambitions. The Sultan feels certain that his actions protect his daughter and uphold the law. This non-singing role is perfect for an actor who can convincingly play a dizzy yet doting father.
Gender: male
Iago
Iago is a Parrot Vendor who becomes Jafar's wise-cracking, sidekick parrot. The role can be played by a boy or a girl, and is perfect for someone who can move well, and an actor who can provide some non-human gestures. Cast a performer who works well with your Jafar to maximize any comic moments.
Gender: both
Tiger God
The Tiger God guards the lamp and the Cave of Wonders. The Tiger God is an all powerful presence yet a tad bit sassy to keep it interesting. Cast a performer who has good timing and is comfortable showing strength with his or her voice.
Gender: both

Genie
Genie is the magical spirit of the lamp. Funny, fast-talking and quick-witted, this character is a chameleon who uses improvisational skills to help his master. This performer (male or female) should be a great actor with impeccable comic timing. The Genie doesn't need to be a trained singer as long as he or she knows how to keep time and sell a song.
Gender: both

Junior Djinn
The Junior Djinn are the "spirits of the cave" who help execute the magic of the story. They have an aura of mystery during the magical moments of the show, but they can perform like true Broadway stars during their big song with the Genie. You can cast as many Junior Djinn as you like depending on the skills of your performers and your specific needs to create the Genie's magic. Look for good singers who move well and can show expression on their faces.
Gender: both

Avis
Avis, a flying carpet, will work best when treated like a character in the show. Rather than a rug on wheels, Avis should be spry - a puppet manipulated by actors, or even an actor in a carpet costume. Look at the "Props" section on page 10 of your Director's Guide for suggestions on creating your Avis.
Gender: both

Ensemble
The Ensemble members will portray the Marketplace Hawkers, Gymnasts, Wrestlers, Bread Sellers, Fishmongers, Belly Dancers, Beggars, Cloth Vendors, Puppeteers, Royal Guards, Royal Trumpeters, etc. There are many featured solo speaking and singing lines from the ensemble, so cast as many students as you can handle, and then assign solos based on the strength of each performer.
Gender: both 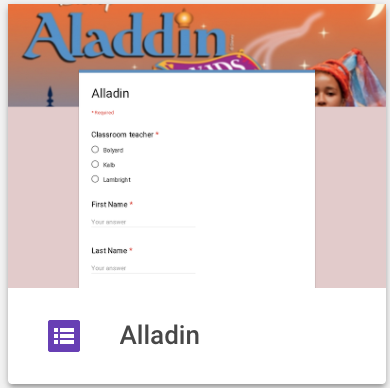